Image of the Week: Interactive Game Recap by Vancouver Canucks

Description: After each game the NHL Vancouver Canucks use ThingLink to provide highlights to their fans with an interactive "Game at a Glance" recap.  Hover over the hotspots to watch YouTube clips of the three goals scored by the Canucks in a 5-4 loss to the Pittsburgh Penguins, as well as a tweet shout-out to star player Jannick Hansen.

Special Mention: Vancouver Canucks uses ThingLink to feature Toyota as their sponsor. Learn more about sponsored content in native advertising by getting in touch with our team today.

The next featured image/video of the week will be chosen on Friday. Have a great example? Send your suggestion to social@thinglink.com.

Want to learn how to create an interactive recap like Vancouver Canucks? Schedule a demo with one of our experts! 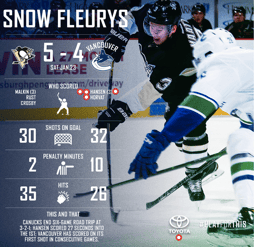 Andrew Beelitz is Growth Operations Director of ThingLink, an interactive media platform that empowers publishers, marketers, and educators to create more engaging content by adding call to action links to images and videos. Based in New York City, Andrew is responsible for ThingLink's operations and is very active in growth, product, and strategy initiatives.